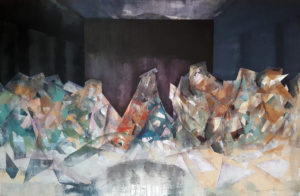 My version of La Ultima Cena by Leonardo da Vinci, “Leonardo’s most famous painting of the 1490s is The Last Supper, commissioned for the refectory of the Convent of Santa Maria della Grazie in Milan. It represents the last meal shared by Jesus with his disciples before his capture and death, and shows the moment when Jesus has just said “one of you will betray me”, and the consternation that this statement caused.

The novelist Matteo Bandello observed Leonardo at work and wrote that some days he would paint from dawn till dusk without stopping to eat and then not paint for three or four days at a time.[81] This was beyond the comprehension of the prior of the convent, who hounded him until Leonardo asked Ludovico to intervene. Vasari describes how Leonardo, troubled over his ability to adequately depict the faces of Christ and the traitor Judas, told the Duke that he might be obliged to use the prior as his model.”

Posted in | Comments Off on Shapes 13